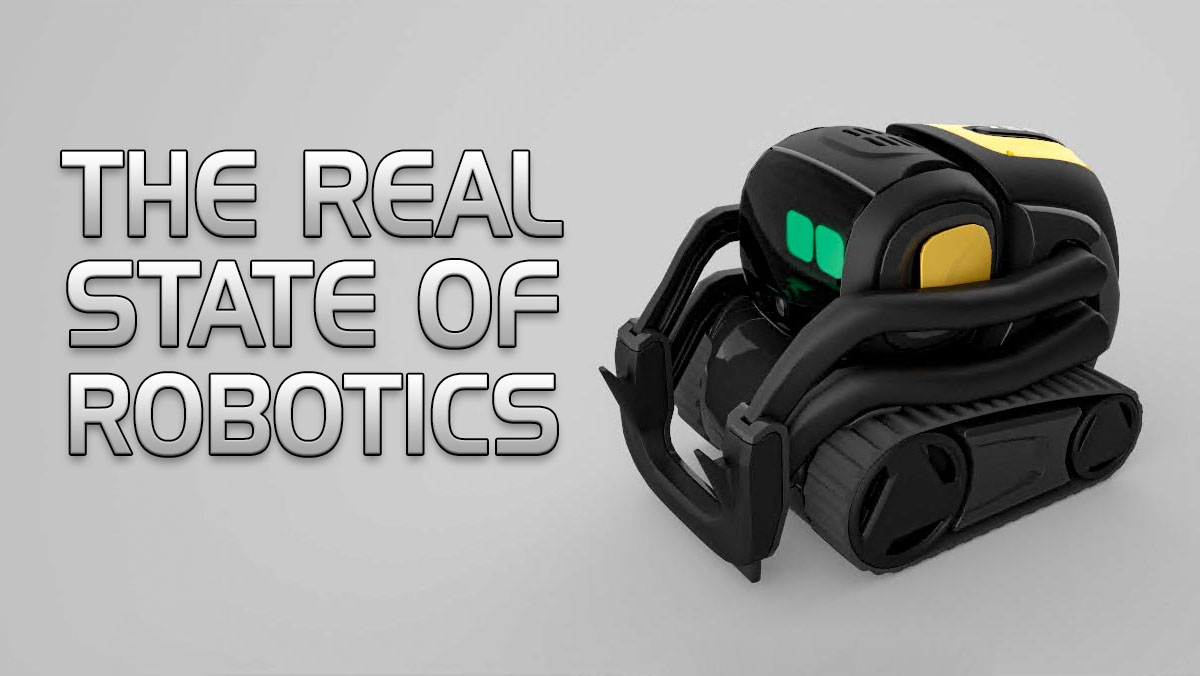 “State Of Robotics” is the title of the webinar that Digital Dream Labs holds every three months and the last ones were full of misinformation and smokescreens like that “state of production” chart. Or they just reiterate the same information already given months before.

The first project we’re calling “The Escape Pod” and it is going to allow you to be able to take Vector off of his external servers while still being able to function perfectly.

“Function perfectly” would have definitely to include knowledge base and weather. Both are not possible. DDL says there is an extension engine to implement this yourself, but it is nearly completely undocumented and normal users that are not developers will be never able to use this. In addition they broke their own extension engine with the update to Escape Pod 1.8.x, that’s the cause why Cyb3rdog’s Cyb3rVector is no longer working with the extension engine. So they do not only break promises, but also their software.

This will safely expose settings over Bluetooth, allow the user to move and set endpoints, and by doing so, remove the need for the cloud server.

In other words, your Vector will become 100% independent and he will be part of his natural habitat, your home!

See above, functions missing, Vector is not 100% independent”, especially not as long as DDL breaks Escape Pod functions with updates that render external tools useless. That definitely is not “100% independent”.

First things first, let’s get Vector in the hands of the users.

Vector already is “in the hands of the users”,, this is just a hollow phrase. This promise meant to enable the users to change his functions and add functionality. Not done.

Through this project, we will build a bootloader image that permanently converts a production robot into a “Dev” robot.

An OSKR Bot is not a dev bot, OSKR only grants access to parts of the Yocto Linux system, others are still locked down. Real development of new features is not possible this way.

We will enable the user to flashboot system partitions.

Done: no and yes.

You are able to flash firmwares onto Vector, but only the ones DDL provides. The only person I know of that was able to create his own firmware is Wire and his firmware mostly consists of changes to animations and config files, because real development is not possible.

We will control ownership and authenticity through cryptographic security.

But the only thing they control with cryptography is their paywalled robots. That is especially interesting when seeing the next points:

We will provide an additional set of keys to the community for the purpose of making open Vector builds.

Done: Not at all.

Do you see any “open Vector builds” anywhere? No, because it is not possible, because devtools are missing, documentation is missing, parts of the robot are still secret, paywalled and not open, especially not “open source”. “Additional sets of keys for the community” do not exist.

With the robot unlocked, we will then establish a step-wise fashion of releasing additional keys for various portions of Vector to the community to continually enhance and expand features.

“Enhance and expand features by the community” not possible besides changing some json files or changing animations. No devtools, major parts of the source missing, documentation missing. Plus the robot is not “unlocked”, quite the opposite: DDL made sure to cryptographically wall him, making sure no one is able to create “open Vector builds”.

OSKR means Open Source Kit For Robots. A lot of Vector still is closed source and will most probably never be revealed. Open Vector builds are not possible and I cannot see that happen. Because that would lead to Vectors that could function without a DDL subscription ransom (disclaimer: I thought that earlier subscription prices were reasonable, but the new ones are ridiculous) and without the need to buy an Escape Pod.

We will continue to build the backend of our systems and organize the community to a point where users can design and license back to us features they’ve designed.

Not possible even after two years. DDL had more than enough time to do this, but it is nowhere to be seen and will most probably not be implemented in the near or mid future. Seeing how DDL struggles maybe never.

These users with then share in the profits realized from sales of these licenses.  We will take advantage of the cloud architecture that oversees a ‘fleet’ of over 200,000 (and growing!) active robots and refine its function.

There are no sales of licenses, because: See above. There also is no “refining of functions” besides some very, very basic and quite trivial stuff such as changing the eye color from the app. Adding a few more phrases in “friday updates” is cheap child’s play and no real “refinement”.

Under “risks and challenges” on the Kickstarter campaign page they

To ensure success we have carefully examined, over the course of months, the pitfalls and potential hangups that might arise in this project. We have built a team that we feel mirrors the previous company’s core infrastructure and we have hired many former employees as consultants to aid us in the identification of issues and to learn Vector’s systems faster.

If that were so, Digital Dream Labs should have been able to implement far more than they have until now. Their team is too small, as probably is their knowledge about Vector or they would have been able to accomplish more. In addition they are stretched way too thin over multiple projects (Vector, Cozmo, Overdrive, Butter Robot, Vector 2.0, Cozmo 2.0, that obscure drone). Also I have no idea how many former Anki employees actually work at Digital Dream Labs, but if there were actually any developers around, DDL should be by far further than they are now with their Vector- and Cozmo-related projects.

Nearly two years after the successful end of the Kickstarter campaign, that infused them with over half a million dollars, nearly nothing promised is done.

That is the true “State Of Robotics”.

The least Digital Dream Labs should do is to assign enough workforce to these projects to actually get something done. But since Hanchar only cares for money and not much else (in my opinion) this will most probably not happen. With the current Status Quo I cannot see anything of the above to arrive in 2022. Urgently needed improvements to Escape Pod will come in “fall 2022” if we are lucky, as one representative said, that  probably may change, so be delayed to a point in time even later than that.

p.s.: Oh, and I forgot Vector 2.0, that was promised for may 2021, then delayed to mid february 2022 and still is nowhere to be seen. What they did accomplish, however, was a senseless lawsuit against Living.AI and Emo, a company that actually delivered what they promised …

p.p.s: Have a look at this Dilbert comic strip that fits perfectly to the DDL situation … 🙂