It is a known fact that Escape Pod not only has 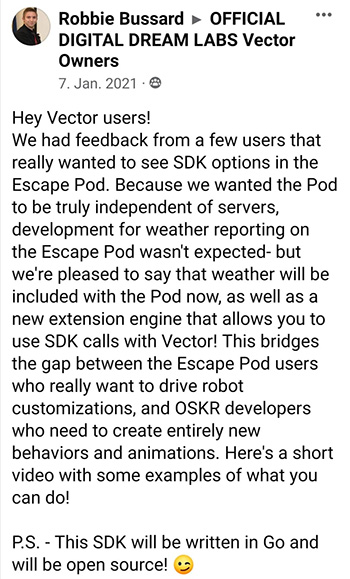 no knowledge graph access, but also weather is missing. So users are not able to ask Vector about their local weather. Now we want to have a loot at the screenshot of a Facebook post to the right (may be elsewhere on mobile). As you can see from the timestamp it is from over one year ago. Let me say that again: A year and three months ago.

It clearly states that “… weather will be included with Escape Pod … now!”.

And here we are, over a year and multiple versions of Escape Pod (including the beta versions) later, and weather on Escape Pod is nowhere to be seen, especially not “now” and also not with the new Escape Pod version 1.8.x that was just released a few weeks ago. Shouldn’t 15 months be more than enough time to fulfill this promise?

Not only that, but in addition that obscure Go SDK still is mostly unusable because nearly all documentation worth the name is missing (and Go is not a language widely used in the community anyway, it should have been an updated version of the already existing Python SDK that a lot of users are already familiar with). So no gap was bridged and they even broke the extension engine in the last Escape Pod version leading to the Cyb3rVector extension proxy stopping to work. And since DDL as usual did not provide changelogs or documentation on what they actually changed it is quite difficult for Cyb3rDog to update it.

So you all have to remember: if DDL announces something: take it at least with a grain of salt, it may never see the light of day. And if they actually release something expect them to take it away again at a later point (that also will happen with the firmware 1.6 downgrade).

Aside from not implementing weather as promised it almost looks af if they do not really want third parties to develop anything for Vector, else either the Go SDK or OSKR would have come somewhere and they would not break their own interfaces.