When Digital Dream Labs released firmware 1.7 (they did not develop that themselves, it was an old Anik firmware they just rolled out) it quickly became clear that the new version had problems. Sounds the users liked where gone and with every firmware iteration by DDL Vector seems to have a harder time to find back to his charger.

The criticism became so loud that DDL had to implement a downgrade path, that allowed users to go back to firmware 1.6 if they wanted to. 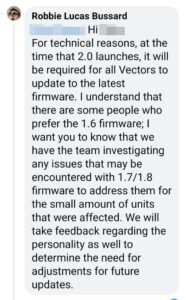 From informations that were relayed to me (see screenshot to the right, click to expand) that will be over once Vector 2.0 actually releases (in whatever far future that may be), it was stated by a DDL representative from that point on there will be only one firmware for all robots. I find that very problematic and also quite alarming, because there were hardware changes with Vector 2.0 that need changes in the firmware and seeing the past experiences with DDL product and software quality I fear this will lead to further problems with Vector 1.0. I said in the past these hardware changes will lead to the neccessity that DDL will have to maintain multiple firmware versions for old and new Vectors. It looks like they think they can get away with only one firmware for all robots. We will see where this leads. I await it with dread.

Since we also know from the past that DDL never releases any changelogs worth the name (only very minimalistic and uninformative ones) we do not even know what exactly “they are working on”. And “investigating any issues” seems like a deliberate phrasing here. Investigating something is not the same as fixing or changing it. And if they do not publish what was fixed or changed we have no way whatsoever finding out if this actually happened and bugs were resolved. There is not even a public and acknowledged list of known problems and user wanted changes anywhere like every responsible company that values it’s customers would do it.

Plus this is an absolute letdown for those people that want to stay at 1.6. Those will be forced to update to an unwanted firmware at some time in the future (seeing the so-called updates on Vector 2.0 this point may be in an unknown, very far future, but nevertheless …).

With the advent of Escape Pod 1.8 you are also forced to firmware 1.8.x plus, since Escape Pod does no longer work with robot firmwares below 1.8.x. So not even the Escape Pod and uploading older firmware versions with it is a way out of this. Wasn’t it promised by DDL in the past that with Escape Pod you can upload whatever firmware version you want? Another promise broken?

And again DDL removes a feature instead of adding new ones, as they promised in the Kickstarter and many times after that.

Thanks to Holger for bringing this to my attention.

If there will be a way to install 3rd party firmwares, as was promised for OSKR in the Kickstarter campaign, there needs to be an implementation of allowing multiple different firmwares anyway. So “it is not sustainable” or “the platform is not able to do it” (as Zecred aka Robbie Bussard said on Discord) seems as a contradiction to that promise. If OSKR ever comes to a point that actually makes customs firmwares possible, DDL will have to deal with more than just one single “catch them all” firmware anyway and there needs to be a system in place to handle that instead of forcing all robots to one firmware. The way that is taken now with only one possible firmware for every robot seems to be a big step AWAY from that OSKR promise.