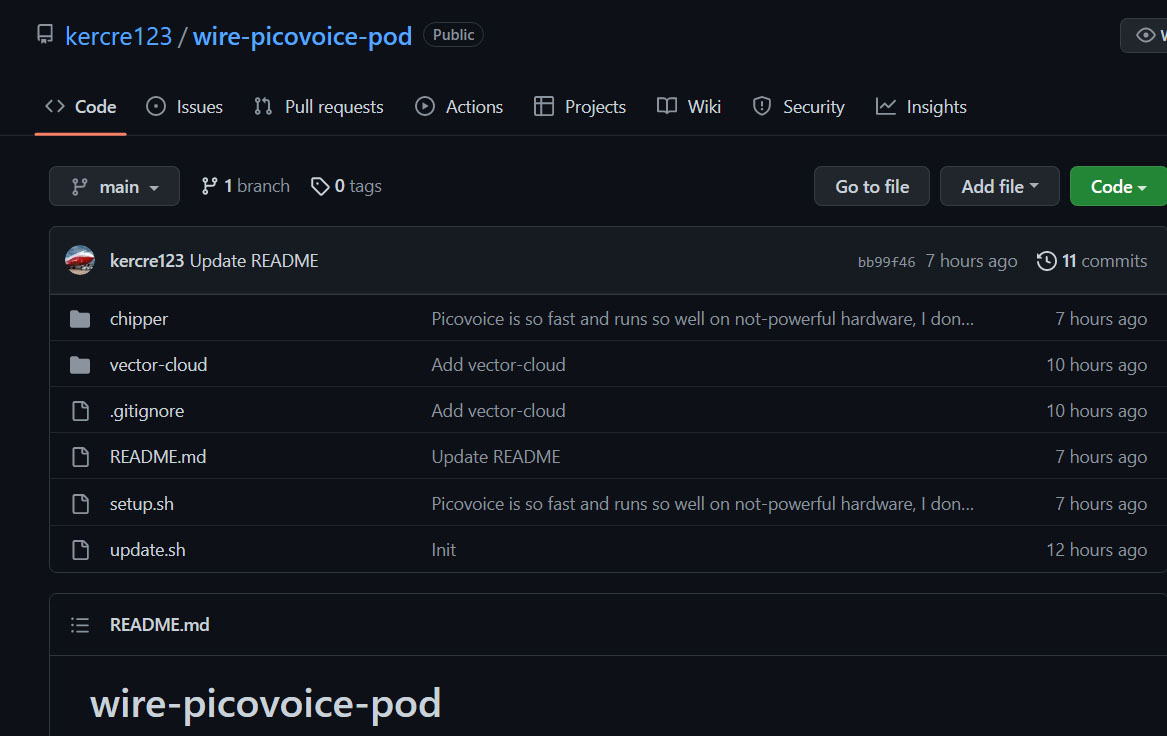 There are a number of updates for the open source Escape Pod solution that Wire provided using the open sourced libraries for Chipper and Vector cloud.

After installing wire-pod onto an older laptop that I have lying around for Linux stuff (I usually run Windows on all of my devices) there were errors and it did not work. Wire immediately replied and credited the problem to the old processor that does not work with the speech recognition software/model used on wire-pod. But he promised solutions.

That was two days ago. And Wire is fast.

Last night (european time) he already messaged me that there is now a fork of wire-pod called wire-picovoice-pod (on Github). It does not use Coqui STT for text2speech, but Picovoice. The main difference is that you need an account at Picovoice, but with Vectors access parameters the free one is sufficient. Picovoice Leopard not only is better than Coqui STT, it also supports more hardware platforms. Wire-picovoice-pod will be developed alongside wire-pod as a fork.

In addition there now is a version of both pods available for Windows. You will need to use Windows Subsystem for Linux (WSL) and installation and usage of that is not for the faint-hearted and you will need advanced Windows and of course Linux knowledge (you will have to use Windows powershell to install WSL), as basically WSL installs a Linux into Windows (as a subsystem, as the name suggests). WSL is only available on later versions of Windows 10 (according to Micro$oft: Windows 10 version 2004 and higher [Build 19041 and higher] or Windows 11). I tinkered with it around two years ago and it was a pain and did not install or work reliably (as was also reported by multiple reknown tech magazines), but I have read that it was improved since then. I cannot say anything about that because since that time I never touched it again. I will now probably have to do that. 🙂

It is amazing what Wire is able to do in such short timeframes.

Caveat: wire-pod and wire-picovoice-pod still only work with  OSKR and dev Vectors.

Another thing we can derive from this is that DDL rips off customers with subscriptions. They could easily provide a free cloud-based text2speech-solution via Picovoice, that would make subscriptions unneccessary, users just would have to setup an account with them. And even if they were using a paid service from Picovoice (or someone else): If you have a look at the pricing at their website (and there are “200000 active Vectors users” out there, as by their own claims), one can easily deduct that the subscription prices are way too high and obviously Digital Dream Labs uses the subscription prices to generate heaps of money, especially with the newer raised subscription cost. Of those “active users” are of course some kickstarter backers with lifetime (12.489 to be exact) and some that bought lifetime when it was offered later, we cannot know how big this number is. But if we assume a yearly subscription price of 99 dollars and only 20000 of those 200000 users have an active subscription, they make a whopping 165000 dollars each month (or nearly two million each year: 1980000 $) … Yes, I know there is more to it than just voice2text and there are other servers involved that also have to be paid. Still I stand with my opinion that the subscription is overpriced for the provided service and a money grab.

Seeing that Wire also was able to implement an open source Escape Pod  with a weather service in such short time, one must ask why nothing of this was implemented by DDL in the original Escape Pod. I am quite sure that knowledge graph also will be possible (speech2text the user inquiry, relay it to a software that retrieves the first pargraph of Wikipedia, send it to Vectors text2speech engine). Instead DDL breaks their own Escape Pod preventing third party applications from working. It should be absolutely doable for a company like Digital Dream labs to provide a fully functional (hat tip to Mr. Data) Escape Pod as it was promised in the Kickstarter campaign.

But of course they have no interest in that, since most subscriptions then would be canceled.