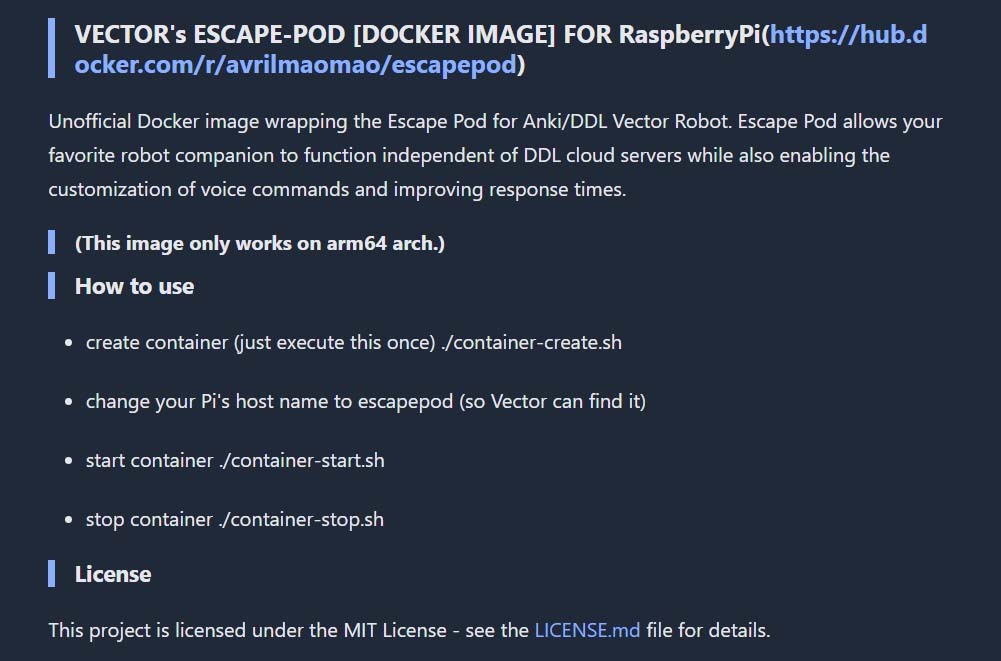 At the moment the Escape Pod works as follows: You download the image provided by Digital Dream Labs and “burn” it onto a SD card. That image is not only the Escape Pod itself, but also contains the underlying Linux operating system.

A lot of users were unhappy with that approach. If you already have a Raspberry Pi 4 running for other things (e.g. PiHole) you would either need to reuse that for only Escape Pod or you would need to setup another RasPi just for this usage scenario.

User avrilmaomao now created a docker image for Raspberry Pi. With it you can install Escape Pod onto an already existing Raspberry Pi, using the Linux falvour that is already running on it. That makes a lot of things easier, e.g. Linux updates, and you do not need to run RasPis just for Escape Pod. This may even make it easier to run Escape Pod on emulated RasPis.

Again a user was able to do what Digital Dream Labs was not. And it is still very unfortunate that DDL insists on keeping the inner workings of Escape Pod a secret. With access to the Escape Pod code it would certainly be possibe to port it to X64 Linux and maybe even Windows. They most probably do not do that because they fear pirating and are not able to implement a licensing system to prevent that (should be quite easy doable tethering the Escape Pod, whereever it runs, to a customer user account).

Please be advised: This only works on ARM based computers, so unfortunately it cannot be used to run an Escape Pod on an X64-based Linux server (but see cyb3rdogs docker solution for that, but you will need to have a running Escape Pod on a RasPi to transfer it).

For more information visit avrilmaomaos project home page on Dockerhub or see informations on GithubHelp. There also is a Github repository.