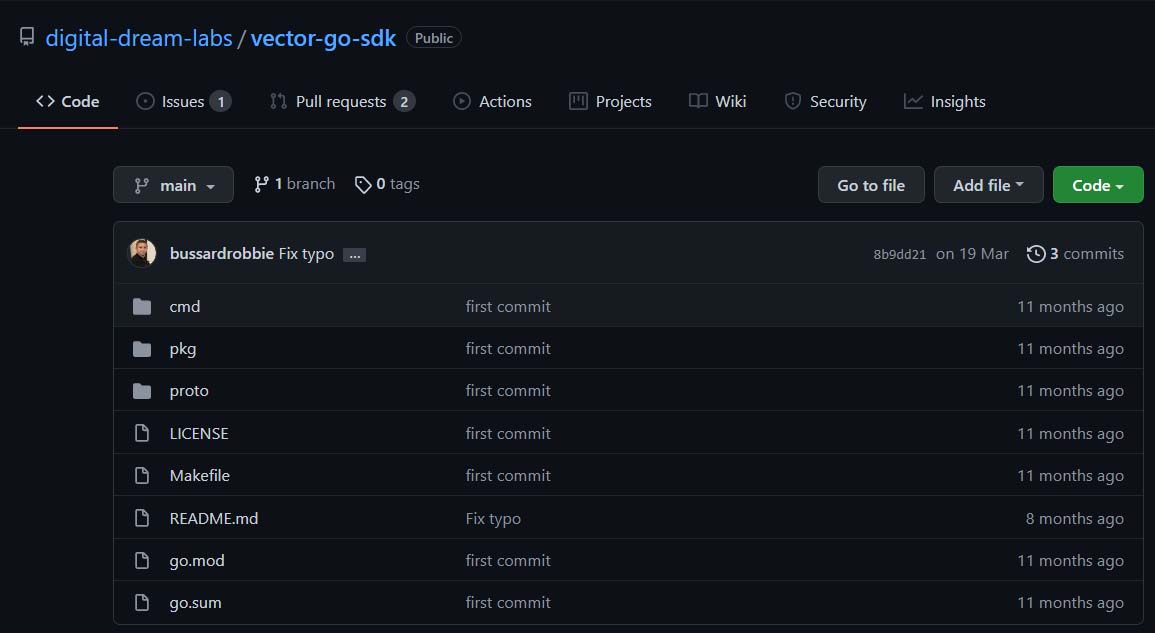 In january 2021 Robbie Bussard of Digital Dream Labs announced a Vector Go SDK for Escape Pod, since a lot of users were unhappy that they cannot use the Python SDK with Escape Pod. And that was of course a major neglectence by DDL. To quote Bussard from january 7th 2021:

Hey Vector users! We had feedback from a few users that really wanted to see SDK options in the Escape Pod. Because we wanted the Pod to be truly independent of servers, development for weather reporting on the Escape Pod wasn’t expected- but we’re pleased to say that weather will be included with the Pod now, as well as a new extension engine that allows you to use SDK calls with Vector! This bridges the gap between the Escape Pod users who really want to drive robot customizations, and OSKR developers who need to create entirely new behaviors and animations. Here’s a short video with some examples of what you can do! P.S. – This SDK will be written in Go and will be open source!

Well, eleven months ago someting was released on Github (see above image). And that’s it. This was declared “early alpha” and that’s it.

Only three of four meager examples and no even halfway useful documentation at all. As you can see in the screenshot and on Github, NOTHING (but fixing one typo) was done with this since eleven months. They dropped it, said” jay! now we have an SDK” and left it alone, never again updating it, as we are now used to from DDL. They “release something highly unfinished and/or unusable and then never work on it again (you just need to look at their Github repositories, in most of them there are never any commits).

Aside from that: Personally I think it’s useless anyway, since the community usually knows and runs Python and Go is a niche-coding language that only professionals know and use. Also it’s syntax is far away from Python and way more complicated (since it was created by Google for efficiency, not with user-friendlyness in mind). The professional way to go would have been to implement the Python SDK with the Escape Pod, instead they release this bait – and then never work on it again.

Another fine example how DDL works: Release a bait and then never work on it again.

I will not even talk about the fact here that weather still is not available in Escape Pod, eleven months later, and it looks like it was silently scrapped.

You actually CAN use the Python SDK with Escape Pod and OSKR because a third party (cyb3rdog) did what DDL was not able to. But still this Go SDK is another unfinished DDL promise.