We all remember the repeated copyright trolling by Digital Dream Labs against KEYi Technology, the company behind Loona the Petbot. DDL took down the Loona campaign on Kickstarter two times with very questionable “reasons” that looked like simple copy&pasting of the similar stunt they pulled against Living.AI and Emo. Digital Dream Labs tried to claim copyright on such simple things as “emotion”, “eyes” or “voice commands”, which at first glance obviously is ridiculous, since those are very basic concepts. It’s like them trying to copyright “air” or the “color green”.

After some silence there was one of the usual fishy pr messages that sounded like a typical Hanchar boasting – and it was, since it was posted by him personally. And of course he would post something he considers a victory himself, to claim all the glory. All we robot fans were baffled by that statement because it looked quite strange and was in part gibberish and lacked correct formatting (also something we would expect from Hanchar, see his TikTok videos for more examples). Ten minutes later it was pulled again and shortly after that replaced. 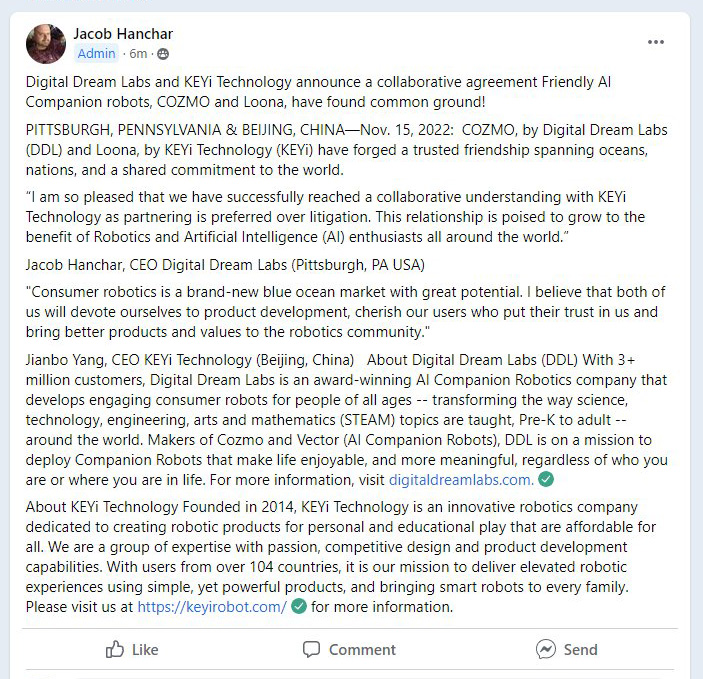 Let’s see (in front of “About Digital Dream Labs” a line break is missing):

“Consumer robotics is a brand new blue ocean market” – no, it is years old and there are heaps of robots of all types already around that do not belong to DDL. “Blue Ocean” is marketing BS speech and means a “new  and uncontested market”, sometimes with the addition “that can be exploited cheaply”.  So in dismissal of reality Hanchar thinks the consumer robotics market is “new and uncontested” and that he thinks he can cheaply exploit it (to the disadvantage to others), is now quite obvious. I hope he tells that to Sony or Samsung some day, I’m sure they will die laughing.

“DDL is an award-winning company” – I wondered what awards that could be and it looks like they were awarded some occult prize by the United Arabian Emirates.

“we devote ourselves to product development” and “that develops engaging consumer robots for people of all ages” – so far they have developed nothing of note, they only preyed on the achievements of the Anki engineers. They failed with new firmware that is buggy, missing earlier features and leads to overheating robots, and they did very minor updates to Anki’s Vector. OSKR does de facto not exist beyond the very basics and Escape Pod is a mess without a version for Vector 2.0, that was a selling point for that robot. But so far no Vector 2.0s reached the people all over the world that paid for them two years ago, save a select very few that were shipped to the USA. No one knows if or when the international shippings will arrive at end customers, and so far DDL failed to provide proof of those shipments.
Cozmo 2.0 was promised to deliver in Q4 2022, that is nearly over. And of course they also were not able to deliver that promise and instead of delivering, they postponed Cozmo 2,0 without a new date.

“cherish our users who put their trust in us” – are you freaking kidding me? For the last weeks these “cherished users” were left completely in the dark by DDL about the account service problems that lead to countless robots not being able any longer to react to voice commands. No official statement by DDL, false advice (“clear user data”) and generally they tried to bury their head in the sand, trying to sit this one out instead of providing paying customers with the service they pay for. Add to that the fact that they boot every user from their Facebook group that asks critical questions – or even just ask where the robot they ordered is and when it will arrive. Also they ghosted countless people demanding a refund for the vaporhardware Vector 2.0 or asking questions about the account service problems. And there are quite some reports of canceled subscriptions where DDL continued to charge customers credit cards. And some more problems I do not want to list again, like not delivering Kickstarter pledge awards as OSKR. And Digital Dream Labs went into a nearly complete communications blackout so they do not have to admit their technical problems.

Does all that sound like “cherish our users” to you?

“3+ million customers” – I have no idea how they come to that number, I can only guess they count all owners of an Anki Vector as their customers, if those want to be or not.

Compared to all that the KEYi description reads like it is far more rooted in reality than DDL’s boasting. And KEYi actually developed something themselves: Clikbot and Loona.

So according to DDL’s statement, there is a “collaborative agreement” and a “trusted friendship”.

The reality sounds a little different, as we can see from another Facebook post, coming from KEYi: 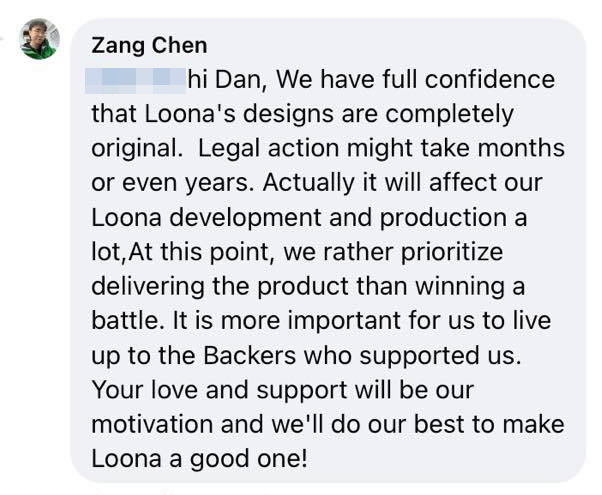 From that it is obvious that DDL forced KEYi to this “friendly cooperation” by threatening them with legal action and KEYi agreed to it only out of respect to their backers and to get out Loona before christmas as promised. That is basically what I suspected earlier. Let’s hope this “friendly agreement” did not involve any of our Kickstarter money flowing to Hanchar and his unpleasant, unprofessional acting company, that in my opinion because of their constant copyright trolling is a threat to every fledgling company that tries to get a new personal robot out to the community. I would hate to know that DDL got or will get their hands on any more of my money.

And another one: If you followed KEYi Technology on Facebook in the last days, there is another area where they wipe the floor with Digital Dream Labs: Their communication. There are constant and regular updates, videos and photos from the production and shipping of the Loona units. Or videos about tech background like how the face animations or units testing are done. There are weekly FAQs where customers questions are answered. Compared to that abundance of information and communication Digital Dream Labs provides nothing, not even dreams. Especially not dreams. Quite the contrary: DDL breaks their customers dreams of having a personal robot buddy by breaking the robots through their service outages that leads to voice functions no longer working. I have seen statemens by users who were devastated because their Vector buddies no longer talked to them as before. “Cherished users”, yeah … sure …