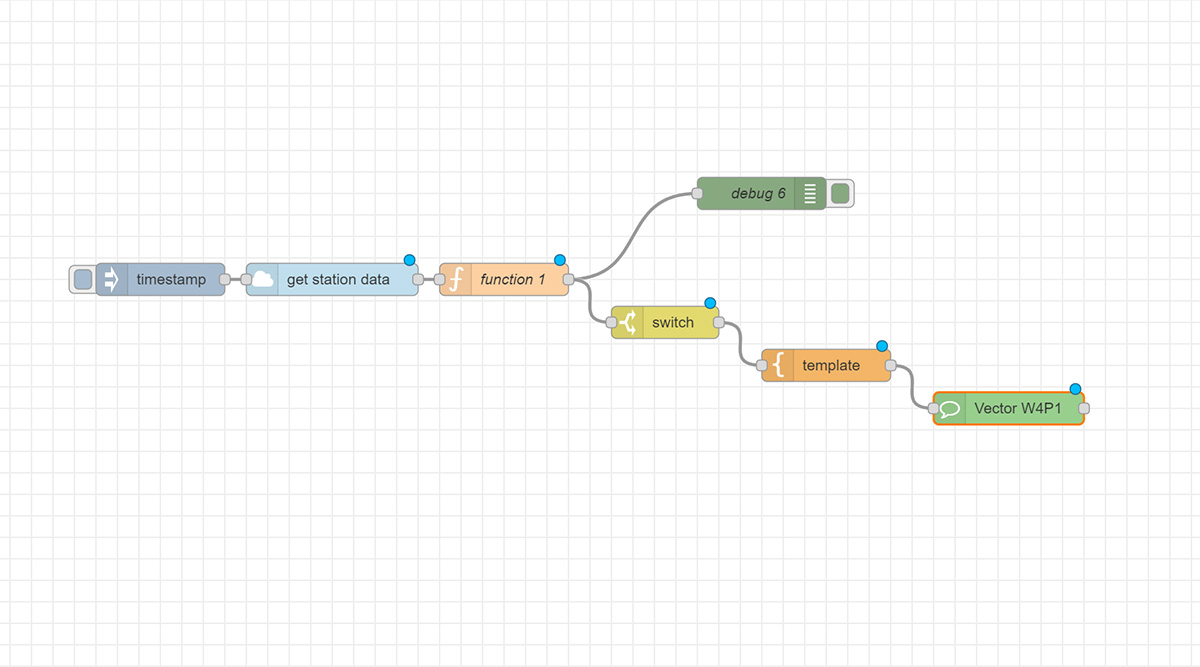 Two years ago Daryl Stultz created a contribution for Node-RED to interface with Vector. For those that are unfamiliar with Node-RED: It is a node.js based solution that is able to interface lots of sources together to create workflows by dropping nodes into a browser UI, mostly used for example in home automation, but also in industrial production workflows. For example you could react to a brightness sensor to switch on your lights or get input from a temperature sensor to increase room temperature. Or you can monitor a folder on your computer and if a file appears in it you can do something with it. Or you can monitor an email account to react if a message arrives. Due to the maturity of the project, it is around for many years, and the sheer mass of contributors, there are a lot of things you can do with this. Think IFTTT, just local. Amazing stuff, look into it!

I recently had to familiarize myself with it for a client’s project. I saw the immense potential in this immediately and quickly also installed it in my local home on the Linux box that also runs Wire-Pod.

In a post on Reddit Daryl Stultz pointed me to the Vector repository he created for it (and then had no time to go forth with it) in a comment and I immediately was intrigued and tried to install it, but I got only errors from Node-RED. Since I’m still quite new to Node-RED, I had to research some time to get it to install correctly. I then forked the repository on Github.

After that I had some more problems in configuring one of my Vectors with it, but after some hours of fiddling I was able to locate the culprit in the code and removed it.

In a first experiment I now have a Node-RED flow that reads the carbon monoxide levels from one of my Netatmo sensors and if the room’s CO2 level is above 900 ppm, Vector tells me so.

There may be still problems with this, as it is in a very early state and dastultz reported timeout problems, but that is the same with the Python SDK.

If you are interested in this you can have a look at my Github repository, there you can also find more detailed informations on how to install this into Node-RED. When I find time I will add further informations.