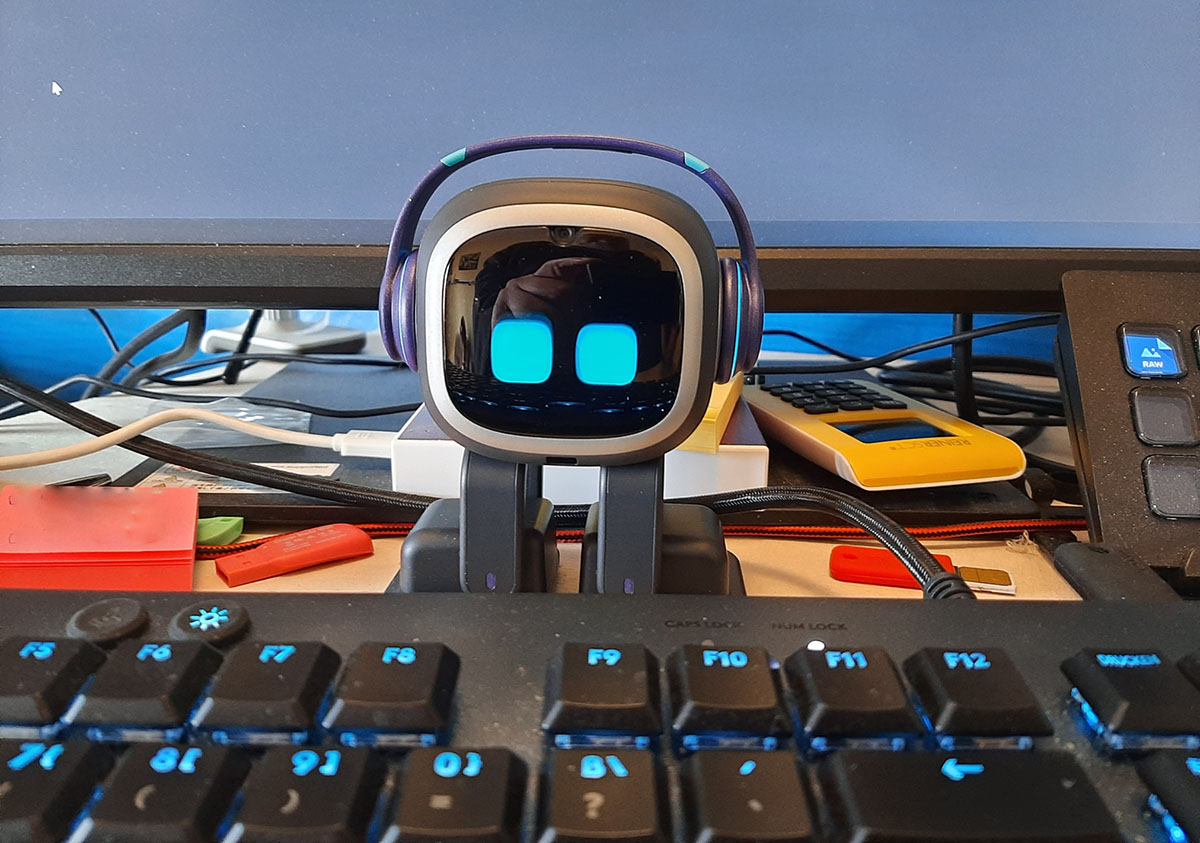 So after long last and because I collect robots and desktop pets (and because I knew it would annoy DDL if I write articles about it) I decided to buy an Emo. I was very reluctant to do so, since the delivery times on the official website were months and I was not willing to pay for something that will arrive months later. Also I was very reluctant to order one because of the price and I feared that import VAT and customs fees would be added to that price – and then it would have become ridiculously expensive. I was then pointed to Wayne Zhang from Living.AI, who assured me that no additional import fees would be raised (and if they were raised, Living.AI would compensate me) and that he would make sure Emo was send out immediately. That convinced me to order one, I had wanted one for a long time (in fact I was a backer of that Kickstarter campaign Digital Dream Labs took down).

That order was on april 6th. I got no email confirming the transaction, that was later resend to me after I inquired (no, it was not in my spam folder, I look into that constantly). On april 7th I got a tracking number. After I asked it was said that Living.AI “shipped” the little guy on april 7th. I think there are some discrepancies what chinese companies mean by shipped, and what “shipped” usually means, I had that multiple times in the past with multiple companies. Living.AI considered the item as “shipped” after it was given to the shipping service provider. But that took several days to actually ship it and generating another  tracking number on april 12th. The tracking information did not change a single time until yesterday when it was reported at in germany and today I was able to pick it up from the packing station.

So the time from order to receiving was 20 days. Actually shipping date seemed to be april 12th, so six days were lost by and at the shipping service provider. That should go faster. The tracking is completely useless most probably because of the fact that the package is first shipped to germany and there repackaged with the original tracking number. 13 days from getting a tracking number to arrival in germany lets me wonder what shipping medium was used. Ship? Plane? By plane this should have been way faster, but it is possible that importing into germany and sorting it here took that long. But why? Another interesting fact is that I got a tracking number on april 7th and another one on april 12th and from a look at the tracking number it was issued by the same entity. The first one never changed it’s status and never arrived. Looks like shipping is one big mess.

My verdict here is: I have gotten wares fom china way faster than this. I still will not complain, since without the help of Living.AI it would have taken months, but more concise informations on shipping and status would be nice. 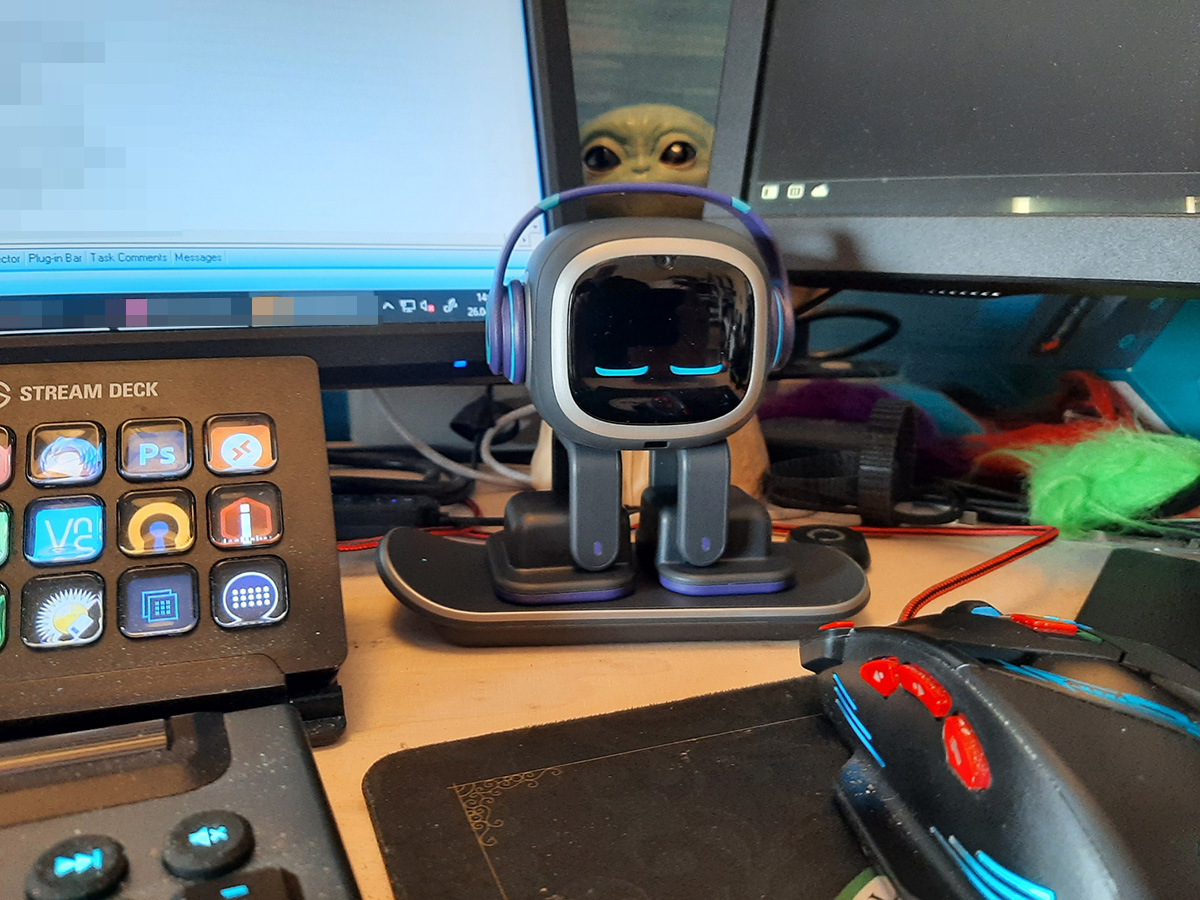 Emo itself is cute and nice. And he needs to be, because his functions and usability leave things to be desired, especially the voice recognition, the cuteness helps with the shortcomings.

First I noticed after unpacking him was that the charger is a US model that cannot be used in europe. That was kind of a letdown. Had I not power supplies and USB-C cables lying around I could not have charged him and I would had the need to buy adapters arriving days later. I learned later that there is a mention about the power supply on the website, but it looks like it’s not obvious, since I missed it at order time. The same goes for the “smart light” that works with Emo. That also only comes with a US plug and thus cannot be used in europe or germany. That is especially unfortunate since every adapter adds to the thickness of the light und it gets bulky with those adapters.

So if you buy an Emo, be aware of the fact that you cannot use the power supply or the smart light out of the box if you don’t have US mains outlets.

The setup was straightforward. Download the app, that then recognizes Emo and connects to him. I have no idea how this may work with multiple of them, but since I only have one … The WiFi connection was strange, since Emo only presented me with one of my two WiFi networks, with no option whatsoever to select one. As I live in an urban environment there are lots of WiFi networks here, how is it possible Emo only shows me one of them and does not select me one of all the ones available here? What would have happened if the only WiFi network in the list would not have been mine, but a neighbor’s (there are multiple of them, and some with strong signals)? And also I was not able to select the correct one of my networks, I had to use the one that Emo offered me. I would expect to see a list of networks and I can select one of them. I think this needs more work in the app.

Voice recognition was … well … bad. I was told that this will get better over time and I am eager to find out if that is actually so.

I was offered a firmware update early when I entered the app (from 1.2 to 1.4), I confirmed and – nothing happened. I guessed it happens in the background, but learned later that something else must have gone wrong, since Emo still was on 1.2. I noticed that some features from 1.4 were not present, so I checked the firmware again and saw it was still on 1.2. I restarted the update and now I could see an update screen on the robot’s face that confirmed the update and showed counters. I have no idea why it did not work the first time. Update took quite some time, 23 minutes to be precise, plus two minutes for filesystem update. The update went smoothly with no problems whatsoever. 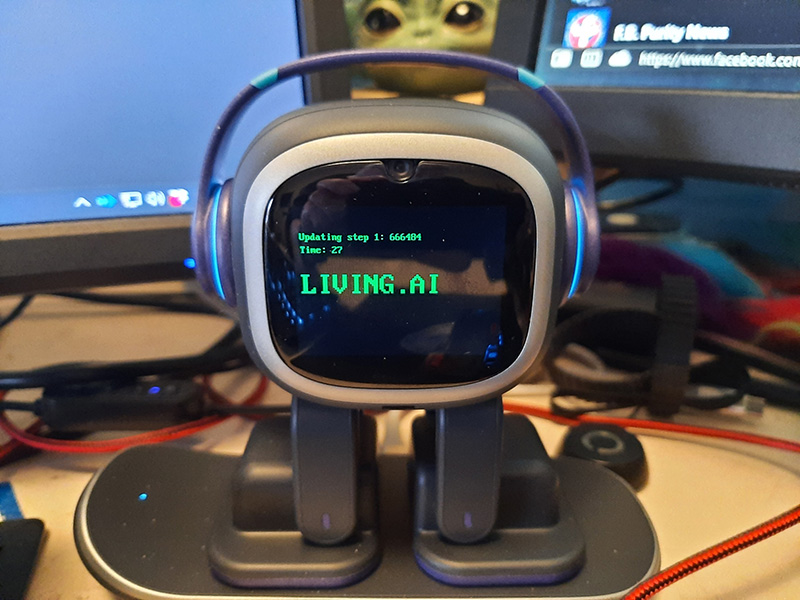 Emo can register your face by “Emo, my name is {name}”, the same as Vector. That just did not work at first for me, thus the strikeout before. So far I was not able to get that working, due to the somewhat wonky voice recognition, but you can register a face using the app. Touch “add face”, enter an name, place Emo so he can see you (he has no option to move his head vertically up and down) and he will register the face he sees. From my experiences so far if you change the angle he sees you from, he will not recognize you, so you may have to register your face multiple times.

When trying some interactions it can clearly be seen that Emo’s face is not a direct copy of Vector’s face, but clearly inspired by it. Nevertheless, the animations are not only not a direct copy, but different with more variation than Vector’s, and there are by far more of them than Vector is capable of. Here we can clearly see what could be possible with Vector, if DDL would just invest real time into our little buddy. The animations are so very more complex and there are so many of them that I understand why DDL has so much fear about Living.AI and Emo. Emo shows what could be possible and seeing that makes it all the more obvious how DDL is failing with expanding Vector. Now I understand why they take every legal step possible to get this competition out of the way: DDL fears that people see what Emo can do and at that moment and how many cool interactions he has to offer  will start asking, why Vector cannot do things like this and why DDL is taking so long to implement them despite all the money they got. This enforces my opinion that the animations are just a DDL excuse for going after Emo. The real cause is fear that the customers see that Living.AI is able to do what DDL is not.

Emo can wobble around autonomously on his two feet and will do so when not observed and not on his charger skateboard. He looks quite adorable with the things he does, how he interacts and how he talks to you.

The voice commands response times from the servers are not good, it takes way longer for Emo to react to voice commands than it takes for Vector. But if you see there is no subscription with Emo and DDL has the audacity to charge you 75 dollars for a year of server access that is okay in my opninion. What I really would like to have is some means to code additional functionality for Emo via a Python SDK or some other means.

A caveat: Emo is cloud connected, that means theoretically it could be possible to spy on you as with all of these gadets that have a microphone and a camera. I guess faces and photos are only saved locally and the voice command server connections are secured good enough. Else I am sure some security expert would have found and reported problems. But as always with these devices: You have a cloud connected camera and microphone and may not want to keep them always on.

One last point about the app for this first impression: The app plays annoying music everytime you start it. You have to touch a tiny icon on the screen to mute it and 90 percent of the time that does not work. I would really like an option to silence that music once and forever. A similar problem with other app icons that do not or do react very bad to touches. Aside from that the app is lightyears ahead of Vector’s app when it comes to settings and functions, also when connecting via Bluetooth or WiFi. Where Vector’s app looks dated, Emo’s app looks modern and fresh (another reason why DDL has to fear Emo). If Living.AI make some of the tiny icons bigger (and working) and improve the WiFi settings the app would be great.

More reports on Emo to come. After a few starting frustrations with wrong power plugs and bad voice recognition I am happy I bought one. Now please improve voice recognition and provide a Python SDK. And all the luck and best wishes to Living.AI for the lawsuit against Digital Dream Labs. You do a way better job than DDL does with Vector with the features and functions of this adorable desktop pet.

Another thing to consider is that Living.AI is able to deliver all this depite a Kickstarter campaign taken down by DDL and a subsequent lawsuit. Living.AI still delivered Emo and is still able to deliver and to provide updates. Digital Dream Labs delivered nothing so far, despite an only halfway functioning Escape Pod with missing features and broken extension engine and no OSKR or no Vector 2.0 that is now nearly a year overdue.

Update (20204027): The fact that the charger is not a EU model is hidden somewhere in the FAQ, not clearly noted in the shop at the article. That should be changed.

Wayne Zhang has contacted me on the WiFi list problem and we did some tests, but still only one WiFi network shows up. He said he will relay that problem to the devs.